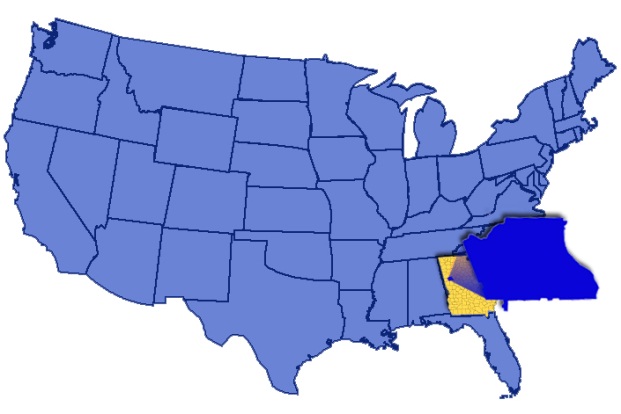 Coweta County was part of the Creek Nation, named for the tribe headed by William McIntosh, Jr. McIntosh was a half-Scot, half-Creek who relinquished lands to the federal government in the 1825 Treaty of Indian Springs. McIntosh was slain by an irate group of fellow Creeks at his home on the Chattahoochee River. Legend has it that McIntosh received gold in exchange for the lands and that the gold was buried and never found.

By 1840, the beginning of the golden era in the South, orderly streets lined with mansions and cottages reflected the growing prosperity of Coweta County.

By mid-century the railroads brought greater fortune and sophistication to the community. The Male Academy and College Temple -- a prestigious school and the first to offer a Master of Arts for women -- were providing educational opportunities in Newnan.

The War Between the States caused a slowing in Coweta County's growth as sawmills fell silent, the railroads became part of the war effort and cotton production severely diminished.
The beautiful antebellum homes found throughout Coweta County are said to have survived because of superb craftsmanship, tireless restoration efforts and the strategies of Confederate General Joe Wheeler who routed brigades of Union troops in the July 1864 Battle of Brown's Mill, just southwest of Newnan. Local churches, private homes, College Temple and the courthouse were turned into makeshift hospitals with wounded from both armies being treated.

The Battle of Brown’s Mill is significant in Civil War history because, even though the South won, it was a turning point for Union forces. General Sherman changed his approach based on the losses at Brown’s Mill and the rest is history.

Coweta County citizens worked hard after the devastation of the war and through that work and resilience, by the early 1900’s, a surge in industrial development had been firmly established.

By the late 20th Century, Coweta County began to experience a tremendous boom in growth, putting it consistently in the top 100 growth counties in the United States. This growth continues today, bringing opportunity and change. The beauty and the rural character of Coweta remain important parts of our heritage, encouraging innovative land use approaches that strive to maintain rural beauty, while allowing controlled development.

Who has served on your Board of Commissioners? Check our list of County Commissioners 1897-Current by year elected.
View Full Site